If you are properly prepared it is not very difficult to protect your property against floods. Sandbag dikes may work, but to build them requires not only huge amount of sand, but also a lot of manpower. Still the work takes time, which is not always available in the event of a flood. Then further resources are needed for the cleanup operation afterwards. Therefore we have developed a new technology, modern mobile flood barriers that can be quickly deployed in the event of a flood threat, then be removed again just as fast. Barriers which also can be easily transported, stored and reused again and again.

The NOAQ Boxwall and the NOAQ Tubewall are two such mobile flood barriers. Both are designed to be automatically ballasted and kept in place by the weight of the flood water itself, making them self-anchoring and stable. We call this design the “bookend principle”. This way we have been able to make the barriers themselves very light. They weigh less than 1% of a corresponding sandbag dike, and are 100 times faster to build. Our 50 cm high NOAQ Boxwall barrier weighs no more than 7 kg per running metre, and a 100 metre long barrier can be built up by two persons in less than 24 minuets.

The NOAQ free-standing temporary flood barriers can be built up by ordinary people, those directly affected by floods. The staff can protect their own workplace, the students their own school, the family members their own home and the neighbors their own residential area. Of course the emergency rescue services and other community resources are still needed, but can instead concentrate on protecting vital public infrastructure as well as help those who for various reasons cannot help themselves. Our products and our technology make it possible for many more people to get involved and make a real difference in the fight against flooding. This will give us a much more flood resilient society in the future.

We are changing the game of flood fighting! 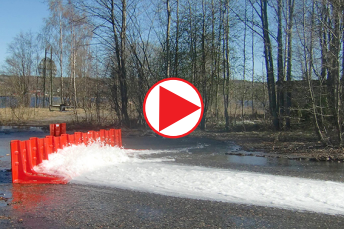